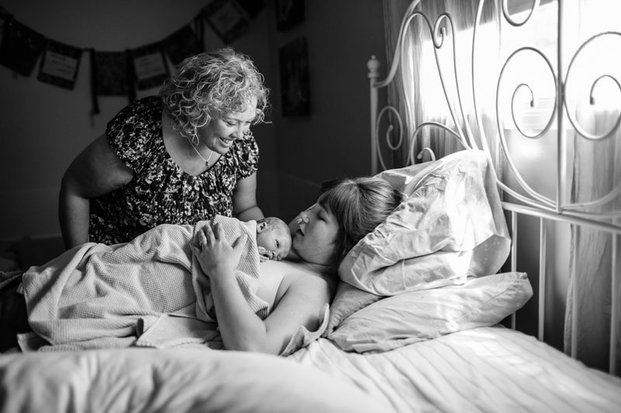 Sabrina Roy, pictured with her newborn Anja, thought she would have to close the newly established midwifery clinic in St. Albert. SUPPLIED
The “heart-breaking” story of how three midwives left stable, full-time jobs under the advice of Alberta Health Services (AHS) last fall to open their own St. Albert practice, only to receive funding for half of their workload, may get a happy ending yet.

St. Albert MLA Marie Renaud indicated Tuesday afternoon that the NDP’s spring budget would bring “good news” for the St. Albert Community Midwives, who announced on Facebook last week that they would be shutting the doors of their new clinic this fall after not receiving the anticipated level of funding from Alberta Health Services.

In October, Jennifer Thomson, Sabrina Roy and Anna Gimpel decided to open their own St. Albert-based midwifery practice – encouraged by the fall injection of funding for midwifery care by the government and by AHS itself.

“We got called that morning before the announcement (of funding for 400 additional births) to tell us that AHS wanted us to open a practice in St. Albert. They approached us with that idea and obviously we were very excited at the time,” said Thomson.

All three left behind jobs at Lucina Birth and Family Wellness Centre in Edmonton to take on the venture, which they believed would be successful, given the high demand for midwives in St. Albert and AHS’s desire to expand midwifery care to rural Albertans, as outlined in its midwifery planning document.

They were surprised when the yearly funding allocation released last week did not provide the clinic enough courses of care – funding for 48 hours of pre- and post-natal care, labour support and a provision of between 39 to 55 per cent for overhead – to continue operations.

As a result, a post on the clinic’s Facebook page said it would be forced to close its doors. “We will do our very best to honour the clients we currently have in care but will not be accepting new clients at this time,” it also read.

A midwife’s workload is typically set at 40 births per year, said Thomson. The St. Albert Community Midwives were allocated 52 to split between the three of them.

The move forced them to consider different business models, such as private payment for services, to stay viable. Roy is considering moving out of province to continue practicing.

Thomson said she is heartbroken to lose the opportunity of being a business owner and saddened to have to turn down at least four new clients, as well as potentially cancel one birth.

She feels like she has had the rug pulled out from under her feet by AHS.

“If that is indeed the case, that’s just incredibly unfair,” said Renaud, who has been requesting a meeting with the minister of health on the clinic’s behalf for weeks.

“It would be tragic to see this happen – on so many levels,” she added. “It’s tragic that these women got together, took a risk and opened a business, and it’s also tragic for all the women who had their hearts set on using a midwife and are probably now sitting on a waiting list.”

Alberta Health Services denies it encouraged the opening of the St. Albert clinic, stating that it does not give advice to private business entities on their business interests.

In an emailed statement, Dave Bilan, AHS interim vice-president of collaborative practice, nursing and health professions, said that courses of care are allocated based on “greatest need and priority.”

St. Albert Community Midwives served not only St. Albert and Edmonton, but the Sturgeon and Parkland counties as well.

According to Nicole Matheson, president of the Alberta Association of Midwives, the problem rests with the fact that Alberta Health Services did not take into account the information provided about the opening of new clinics and other mobility within the profession.

As a result, the money didn’t follow the midwives and most practices were allotted the same courses of care as in the past, without consideration to the number of midwives on staff.

“Without considering the mobility, it’s created a crisis,” said Thomson, who hopes that discussions for a sustainable, long-term funding agreement will go better.

The Alberta Association of Midwives is currently in the process of negotiating a Memorandum of Understanding with AHS “that would allow midwifery to grow.”

Thomson said it’s important to understand that it’s not about more money. It’s about where the money comes from and how it’s being divided that needs to be reconsidered.

Under the current funding arrangement, there is a cap on the number of midwife-supported births. Only 2,774 women can receive the service, which leaves midwives operating at 56 per cent of their collective capacity.

If midwives were placed into the same pool of funding as Obstetricians/gynecologists or doctors, they could support more births, save the system money, and give women access to a service they want. There are 1,800 names currently on the waiting list.

Patient Lisa Brown said she would not have the $4,600 to pay out of pocket for midwifery services.

Amanda Gaudet, a St. Albert Community Midwives patient pregnant with her fourth child, followed Thomson and Roy from Lucina to their current practice.

She said she is “seriously considering” whether to have more children in the future, due to the lack of funding for midwifery in Alberta.

“These women are vital to my maternity care and my entering into motherhood every single time,” said Gaudet.