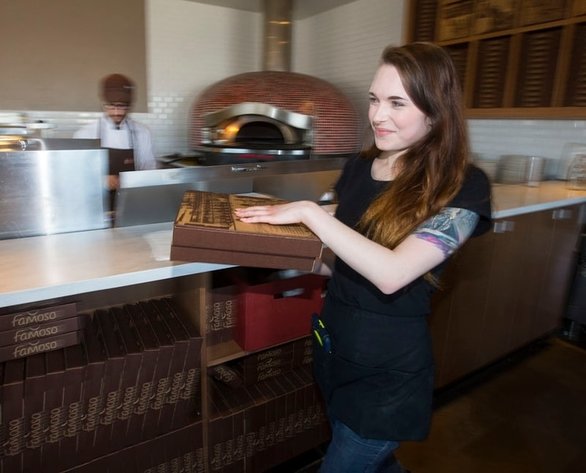 Heather Ljuden collects an order during her shift at Famoso Neapolitan Pizzeria in St. Albert. CHRIS COLBOURNE/St. Albert Gazette
It’s not the $5 hike talked about last summer, but prices at Famoso Neopolitan Pizzeria have gone up across the province due to higher labour costs.

In June, co-owner Adam Carmichael warned that a hike in minimum wage would lead to more expensive meals at the St. Albert location. Carmichael predicted that a pizza would end up costing St. Albertans $20 once the NDP government fulfilled its commitment to raise the provincial minimum wage to $15 per hour by 2018.

Newly hired general manager Brett Verhulst said that probably wouldn’t be the case, but that Albertans should expect to pay an additional two to three dollars for a main – maybe more if customers stop tipping.

The first phase-in, which pushed minimum wage from $10.20 to $11.20 in October, brought about a 50-cent price increase across the menu said Verhulst, who up until recently served as a regional manager for the company.

“That was to try to counteract the immediate increase in labour that we saw from the increased wages for our hourly staff,” he said.

Hours also had to be reduced during off-peak times. Not only does this lead to less money in staff pockets, but “less bodies per shift” translates to a potential for a lower quality of service.

“Unfortunately, the people who suffer from that are the guests, or the consumers in the retail business,” said Verhulst.

According to a survey released by the Alberta Chamber of Commerce last week, the pizzeria is not alone.

The survey found that 36 per cent of businesses reduced the number of employees since Oct. 1, 2015; 15.4 per cent reduced hours of operation; 22.5 per cent cancelled plans to expand; 36.6 per cent raised prices; and nearly half experienced reduced profits. The two biggest reasons cited for these changes were the slowdown in the economy (74 per cent) and the increase in minimum wage (65.5 per cent) – respondents could select multiple answers.

On top of increasing wages for nine staff members – eight of which already earned more than minimum wage – which “takes a chunk out of the profits” of his St. Albert board game business, Mission: Fun and Games owner John Engel had to hold off a major project planned for 2016, since it involved a significant financial investment.

“These business people have been put into a terrible situation,” said Lynda Moffat, president and CEO of the St. Albert and District Chamber of Commerce. “They don’t know what to do. All of a sudden a hammer came down and said this is the way it’s going to be.”

Moffat believes the steps suggested last week by the Alberta Chamber of Commerce are a great compromise between the desire of the province, the interests of business owners and the needs of low wage earners, which make up 2.2 per cent of Alberta’s workforce.

The Alberta Chamber of Commerce suggested the government keep the provincial minimum wage at $11.20, but enhance and introduce government subsidies to using the $178 million set aside for the Job Incentive Creation Program.

Introduced by the NDP government this fall as a way to stimulate the province’s slowing economy the program, which allocates up to $5,000 for employers to hire new workers, has been criticized by local business owners and not-for-profits.

“It talks about looking for other ways to achieve what the government is trying to do, which is to look after the employees that don’t have a high level of income – and that’s great, it’s a great focus, but you can’t only focus on that and forget about the other impacts,” said Moffat.

St. Albert MLA Marie Renaud said the government has committed to reviewing the survey results and she’s interested to see what the budget will bring forward in terms of support for small business. There have been recent speculations that a small business tax reduction – currently set at three per cent – could be in the works.

“If that’s what they’re hearing would be most effective and if the $5,000 job creation (incentive) isn’t the way to go, then I think that we have to be nimble enough to change course and to listen,” said Renaud. “These are very unique times right now, and they seem to be changing month to month.”

But Renaud said there are many myths surrounding Alberta’s low-wage earners – many of whom are women (62 per cent) and seniors (11 per cent), who wouldn’t always qualify for higher paying positions (28.3 per cent have some high-school education) – including where they work.

A research paper released by the Canadian Labour Congress last April, shows that nearly half the minimum wage earners in the country are employed by large corporations.

“Certainly, that’s doesn’t mean there aren’t small businesses that are struggling,” said Renaud. “But to look at the large picture: for low wage earners it’s impossible to raise a family; they’re working multiple jobs. People are living in poverty. And these aren’t always entry-level jobs. Some people are stuck in these jobs.”

A discussion between Finance Minister Joe Ceci and business and not-for profit leaders was scheduled in Calgary for Friday afternoon.