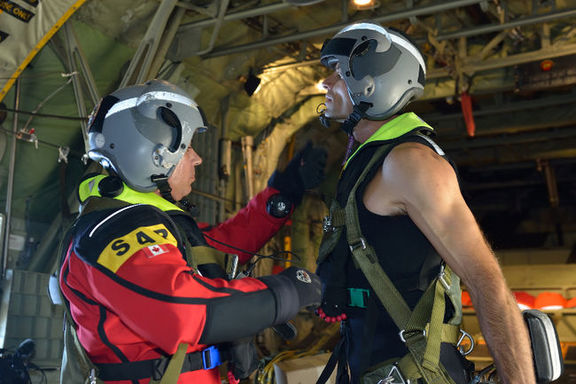 Master Corporal Danny Dicerni checks Sergeant Mark Salesse's harness prior to lowering the ramp of the CC-130 Hercules aircraft during the National Search and Rescue Exercise in Gimli, Manitoba on Sept. 17, 2013. Sergeant Bill McLeod/Canadian Forces
The search for a military man missing in Banff National Park, hindered by bad weather, has officially become a recovery mission.

Sergeant Mark Salesse, a search and rescue technician from 435 Transport and Rescue Squadron based out of 17 Wing Winnipeg, was reported missing Thursday evening after an avalanche swept him away during a routine mountain training exercise on the Polar Circus ice-climbing route in Banff National Park.

Rescue personnel were contacted, but were unable to get to the route due to avalanche hazard, deteriorating weather and fading daylight.

A team of Parks Canada visitor safety specialists led an aerial search on Friday but there were no visible signs of the missing climber.

Once deemed safe, the team will trigger an avalanche, using explosive devices in order to gain access to the site.

Although the search for Salesse continues, his colleagues at CFB 17 Wing in Winnipeg have been told to prepare for the worst.

“We were recently told by Parks Canada ... that their focus is now on a recovery mission,” said 17 Wing spokesperson Capt. Bettina McCulloch-Drake. “It is deemed to be unsurvivable.”

At 17 Wing, “The mood is sombre,” McCulloch-Drake said.

“As you can imagine, when you know that there is pretty well no hope, when the situation is dire, when you’re being told it’s a recovery mission — there’s that sense of emptiness, of shock. But the focus now is on supporting the family, and the members of Squadron 435.”

When Selasse’s climbing mate found out he was missing, he set out to look for him. However, McCulloch-Drake says the experts at Parks Canada have taken over.

McCulloch-Drake said the squadron routinely trained in mountainous terrain to maintain the skills needed to do search and rescue in an area spanning from Quebec to the Alberta-B.C. border to the Arctic.

“In order to rescue someone you need to have the skills necessary to do the search. These are experienced SAR techs, this is not the first time they’ve climbed mountains, they’re just keeping their skills sharp,” she said.

“They do a lot of training to prepare for these exercises.

“They would have prepared for the weather and ensured they were equipped to go mountain climbing in the area.”