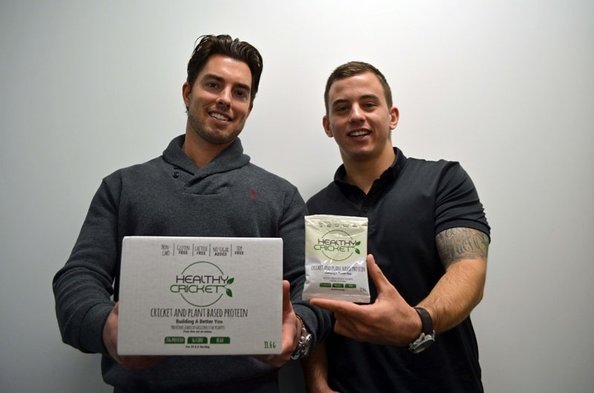 Ryan Bilyk, left, and Josh Higgins founded Healthy Cricket, a cricket and plant-based protein powder, less than a year ago. MICHELLE FERGUSON/St. Albert Gazette
Could bugs be the answer to sustainably feeding a ballooning world population – expected to reach 9.6 billion by 2050?

While most people couldn’t stomach the idea, two local entrepreneurs are embracing micro-livestock.

Insects have always been a part of human diets. From coal roasted June bugs to Australian honeypot ants to fried bamboo worms (a popular Thai street food), at least two billion people worldwide consume bugs as traditional fare and over 1,900 species have been identified as human food.

People just can’t seem to get past the ick factor.

“That’s been our biggest challenge – trying to educate people about why crickets,” said Higgins.

“A lot of people don’t realize,” he continued, “the food that we eat every day already has fragments of insects in it.”

Hate to break it to you, but he’s right. According to Health Canada it is normal – and perfectly acceptable according to their food cleanliness guidelines – to find over 450 insect fragments in your peppershaker and 25 dead mites in your bag of shredded cheese.

Your cup of coffee can be brewed with 35 bug bits.

So since you’re already unwittingly ingesting hundreds of dead bugs daily, why not chew on this? Ounce per ounce crickets contain twice the protein, five times the magnesium and three times the iron of beef (with a lot less fat).

They also provide a healthy dose of zinc, B12 and omega 3; all essential amino acids; and as much calcium as milk.

Plus, in Healthy Cricket’s case, it’s ground up into a fine water-soluble powder that tastes like vanilla with a hint of cinnamon.
“It’s not like you drink the shake and get a cricket leg stuck in your teeth,” said co-founder Ryan Bilyk.

“That’s what really hit home with me,” said Higgins.

According to a 2013 report by the UN’s Food and Agriculture Organization, titled Edible Insects: Prospects for Feed Security, to produce a single pound of beef it takes 2,500 gallons of water and 13 pounds of grain.

Though disproven that insects can feed entirely on organic waste, as it was initially stated in the report, a pound of crickets still only requires 1.7 pounds of grain.

In addition, up to 80 per cent of a cricket is edible and digestible, compared to 55 per cent for chicken and pigs and 40 per cent for beef – making crickets twice as efficient for converting feed to meat. That’s because they’re poikilothermic (cold-blooded), meaning that their metabolism is not used to maintain their body temperature.

According to the UN, our current food production would need to almost double to keep up with the demand of the 9.6 billion people expected to populate the Earth in 2050.

Given the livestock industry contributes 14.5 per cent of all human-induced greenhouse gas emissions (7.1 gigatonnes annually), this would put considerable strain not only on our lands, potentially leading to more deforestation, and fresh water sources, but on our atmosphere.

“Everyone who takes Healthy Cricket will be putting less of a footprint in the world,” said Bilyk, who got the idea for the business two years ago when searching for a whole-food alternative to whey protein.

Healthy Cricket is an entirely Canadian product. The cricket flour is sourced from a plant in Ontario and the formula is manufactured in B.C. The crickets are kept indoors, fed organic feed, then baked, steamed and milled.

It can be purchased online at healthycricketinc.com or at Glow Juicery in St. Albert.