Canada DARTS to the Philippines 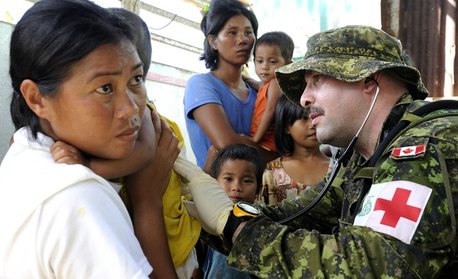 Master Corporal Stephan Fortin, a medic with the Canadian Forces Disaster Assistance Response Team (DART), checks a local child at a refuge camp outside of Roxas City, Philippines. (Photo IS2013-6008-01 by Corporal Darcy Lefebvre, Canadian Forces Combat Camera Photographer)
As the country gathered to honour and remember those who served, those who continue to wear the uniform were gearing up for Operation RENAISSANCE 13-1.

On 11 November 2013 – Remembrance Day – members of the Canadian Armed Forces’ Disaster Assistance Response Team departed for the Philippines to assess the damage left in the wake of Typhoon Haiyan, which struck the island nation on 8 November.

The Humanitarian Assistance Reconnaissance Team (HART) deployed to the Philippines along with the Interdepartmental Strategic Support Team (ISST) – the advance party of Canada’s whole-of-government humanitarian response, led by the Department of Foreign Affairs, Trade and Development Canada (DFATD).

A team of 19 CAF personnel, HART makes recommendations to ISST on CAF capabilities and employment, and is the core of the Task Force Headquarters once full military humanitarian capabilities are deployed.

Upon their arrival in Manila, HART assisted ISST and met with locals, international representatives and the Filipino government to assess the needs on the ground and decide how the Government of Canada could best assist the distressed country. Following their initial meetings, they began conducting surveys and reconnaissance missions on the island of Panay.

“Cooperation with Philippine authorities has been excellent, both at governmental and military levels,” said The Honourable Christian Paradis, Minister of International Development. “The welcome for Canadian presence is very strong, as is reinforcement of the needs that Canada can fulfill.”

With gusts reaching 235 miles per hour, Typhoon Haiyan is one of the strongest typhoons ever recorded. Setting off landslides, knocking out power in several provinces and cutting communications in the country’s central region of island provinces, the tropical superstorm has affected an estimated 11.3 million people in nine different regions across the Philippines.

It has caused significant loss of life, a large number of injuries and damage to many homes and infrastructure. Over 670,000 people are known to have been displaced and Filipinos are currently in great need of shelter, food and water.

After being forward deployed to Hawaii, 43 members of DART’s Advance Party arrived in Iloilo on 13 November. They were quickly followed by additional CAF personnel.

The main body of the DART, which includes a team of 50 engineers from 4 Engineer Support Regiment of the 5th Canadian Division Support Base Gagetown – began to deploy from Trenton on board a CC-177 Globemaster and arrived in Iloilo on 15 November. They brought along equipment and pallets of kit.

Another 70 personnel including medical and support teams left Trenton on 14 November.

During an emergency operation such as RENAISSANCE 13-1, the DART’s primary role is to provide primary medical care, engineering help and safe drinking water.

“There’s a wide array of different tasks that we’ll be conducting,” said Task Force Commander, Lieutenant-Colonel Walter Taylor. “One of the primary ones will be to open roads that have been blocked by the effects of the typhoon.  We have engineers that are operating heavy equipment as well as chainsaws and electrical experts who will be removing a lot of the rubble that’s blocking the roads and permitting the humanitarian actors, the non-government organizations and the UN agencies access to those villages to distribute relief supplies.”

The production of potable water is one of the most important contributions of the DART during an emergency situation. In order to meet this need in the Philippines, the CAF deployed the Reverse Osmosis Water Purification Unit (ROWPU), which arrived in Iloilo city on 17 November.

The ROWPU is set up and maintained by the Water Production Detachment of the DART Engineer Troop and under ideal conditions can purify up to 50,000 litres of safe drinking water a day. The water produced by ROWPU is delivered in bulk to DART medical aid stations and distributed to local residents.

Canada’s latest military contribution to the Philippines consists of three CH-146 Griffon helicopters from CFB Borden and CFB Valcartier and aircrew from 408 Tactical Helicopter Squadron, located at CFB Edmonton. The aircraft, as well as the RCAF personnel who operate them, will support in the relief effort by providing the DART with additional means to reach and help those in need.

The CAF’s efforts are being concentrated in both the Iloilo and Capiz provinces, on the island of Panay. Among some of the hardest hit areas of the Philippines, Roxas was in the direct path of the typhoon.

“Agricultural fields, crops have been blown away; storm surge has flooded the fields with sea water; and fishing boats have been destroyed,” said LCol Taylor. “So the people are really at a loss not only for their homes, but for their livelihoods.”

“But the people here are very resilient,” he added. “They’re fighters.”

DART is a multi-disciplinary, self-sufficient, and flexible military capability which can deploy quickly to anywhere in the world.

DART acts as a stabilization measure and is deployed upon the request of the affected nation immediately after the emergency phase of a natural disaster. It is meant to bridge the gap until civilian aid organizations can set up shop to provide more long-term assistance.