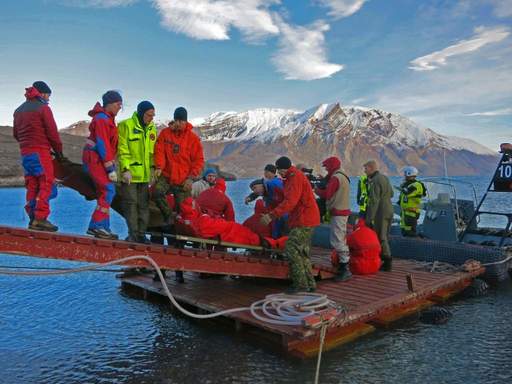 The typical Arctic weather made it impossible to fly – grounding airplanes for a good portion of the search phase.

But according to exercise coordinator Master Warrant Officer Greg Smit, this is actually a good thing.

“Did the exercise unfold the way it was planned?” he asked. “I would have to say yes and then some. We had airplanes that weren’t able to partake in the exercise. We had bad weather, and we had challenging situations.”

Since the aim of the SAREX was to exercise Arctic SAR capabilities in a real and remote Arctic environment, the challenges of operating in the far North were bound – and somewhat counted upon – to create problems.

“We knew that people would act professionally and do what they were accustomed to doing back home in the south,” said MWO Smit. “Moving that to the Arctic is where the challenge is.”

This is the second consecutive year that Denmark hosts the Arctic SAREX. This year it was held in the Greenland Sea and King Oscar’s Fiord, off the eastern coast near Ella Island – a challenging environment, which added to the realness of the scenario.

The three basic goals for the exercise were to improve joint SAR capabilities in the areas of command and control, communication and coordination.

There was major progress on all three fronts, said MWO Smit.

The biggest success was the ability to coordinate a layered response that utilized each nation’s capabilities. Each nation had a role to play from providing first responders, to setting up a forward base element, to dealing with consequence management.

“I think it’s fairly well-known that it’s going to take a group effort to be able to successfully prosecute a large SAR mission in the Arctic,” said MWO Smit.

Joint exercises like SAREX Greenland Sea 13 are an opportunity to develop these coordinated responses and to gain a better understanding of each nation’s capabilities.

The CAF, for example, are very well postured in terms of first response and command and control. They have SAR personnel on standby 24/7, not to mention Joint Rescue Coordination Centres that respond to close to 10,000 cases a year – giving them ample opportunity to exercise their SAR capabilities in a variety of contexts, including the Arctic.

“If there was a major incident in the Arctic, I think 100 per cent that Canada would be involved in a response,” said MWO Smit. “Mainly because we do have capabilities that other nations don’t have.”

For this reason, the CAF provided experienced personnel to the Marine Rescue Coordination Centre in Nuuk, Greenland, and to the On Scene Coordinator, HDMS Knud Rasmussen. These CAF members provided insight and shared their experiences with those calling the shots. The CAF also provided first responders.

But even smaller Arctic Council nations have something to bring to the table. For example, the Danish Defence Forces have an excellent air medevac capability, said MWO Smit. And both Denmark and Iceland have a strong forward base element – a crucial step in SAR operations, which includes stabilizing, organizing and transporting those in distress so that they can be treated down south.

“We don’t fool ourselves into thinking that just because we have a good system and we have good resources that we’re going to get it together and do it all ourselves,” said MWO Smit. “That’s not the case. We need other nations.”

As expected, the harsh Arctic climate did throw the participants a few curveballs.

On the third day, during the rescue and evacuation phase, MWO Smit said it was clear that some people were getting overwhelmed by the difficulty of operating in the North.

But instead of carrying on making mistakes, the exercise coordinators decided to reset the clock and start over the next day.

“What a difference that made,” said MWO Smit. “Day three, as confusing as it was, is why we do this – it’s training. Nobody’s lives are at risk.”

While there are no do-overs in real Arctic SAR operations, he said that it felt good to send people home having done it right.
That way when disaster does strike the CAF and its partner nations are confident in their abilities and in each other.

After all, the most important skill in the North is learning how to work together – something each nation did quite well, manoeuvring from A to Z to provide a joint, integrated and layered response to a realistic major maritime disaster.