Tanner James going back to his roots 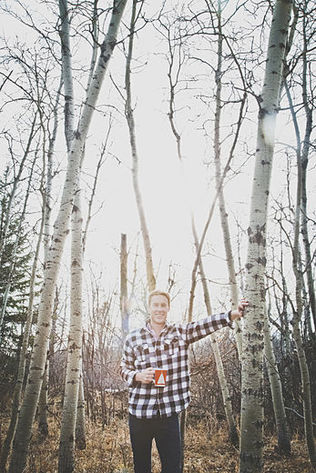 Tanner James
There is this seedy-looking biker bar in the heart of Ocean City, Maryland.

Its soft purple light pours onto the long wooden boardwalk where families order baskets of fries, shop for trinkets and spill out dizzy from carnival rides.

This is where southern-Alberta singer-songwriter Tanner James liked to set up after work or on his days off trying to engage stumbling patrons and cotton candy-eating passerby with nothing but the guitar in his hands and the stories in his head.

A couple of beers and a little bit of courage taught him early on that if he played Violent Femmes’ “Blister in the Sun” he could make enough money for a buffalo chicken sandwich and a case of beer in about an hour.

Eventually he grew tired of the tune. So he started writing his own.

At the time — he was 20 — James knew how to pluck a few strings, but had never played in public before.

But nothing put words in his mouth and bravado in his heart quite like pan handling for food.

“That’s like the best story of my life,” said the winner of the 2014 Calgary Folk Fest 35/35 songwriter contest.

What started off as a simple summer of saying yes to any and all of his friend Colin’s harebrained ideas — including moving to the coast — turned into an important lesson on performing and songwriting.

Now James is a professional singer, storyteller and troubadour. He travels the country sharing tales about falling in love — his 2013 album How to Ruin Your Life With Women is a character study of sorts, where each song is a reflection on a girl, a-la-John Cusak in the millennial pop-culture phenomenon High Fidelity — and more recently growing up in the west.

James comes from a long line of storytellers. His granddad — a “professional bullshitter” — could spin a story out of anything.
He is also a bit of a musical chameleon — playing everything from upbeat indie pop to somber roots.

Currently, James is working on a new folk album — set to release in the fall — that will translate his rural Alberta upbringing.
Titled Painted Horses, he describes the project as “a broad oil painting of life in Western Canada.”

“I’ve grown up outside of Taber and down the road from Corb Lund, so there’s that huge element of inspiration from western culture. But I also grew up skateboarding and playing in punk rock bands in high school, so it’s my alternative take on this culture that I appreciate and try to fit in to, but still always sit on the outside of,” he said.

Tanner James plays at the Elk and Oarsman on Sunday at 10 p.m.