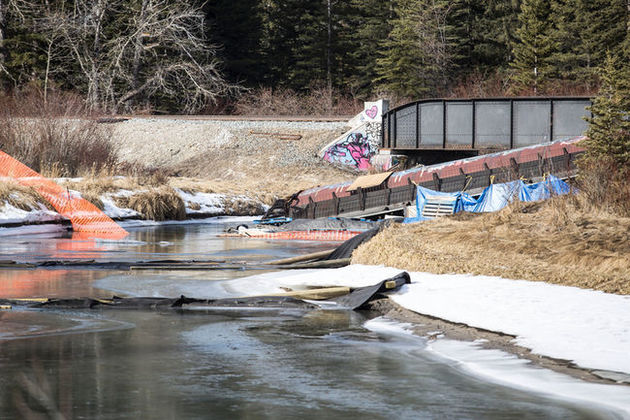 On Dec. 26, 15 CP Rail cars jumped the tracks just west of Banff, spilling lentils, soybeans and fly ash in and around the river.

While the majority of the affected land has been cleaned up, the watershed remains largely untouched as CP and Parks Canada continue to develop a cleanup plan.

Fly ash is a product used in the manufacturing of cement. Although it does not fall under Transport Canada's hazardous materials or dangerous goods categories, there were concerns expressed about the negative effects the sediment could have on aquatic life, including local fish populations, either through suffocation or a significant change to the tributary’s pH levels.

After sending water samples to its lab to be tested, Parks Canada has deemed that the remaining contaminants pose little risk to fish, since they fall below national standard levels for the protection of aquatic life.

The extent of damage caused by the initial spill has yet to be discovered.

Parks Canada is currently working with CP to refine the cleanup plan to ensure the remaining fly ash is safely removed from the river and does not cause further environmental damage to the area.

“Parks Canada expects to be in a position to approve CP’s cleanup plan in time for the railway to begin the safe removal of the fly ash from the water in the near future, with sufficient time to ensure completion before mild spring temperatures increase water flow in the creeks,” stated an email from resource conservation manager David Gummer.

Currently, one of the derailed cars is acting as a dam to facilitate the work being done at the site.

In an earlier interview, Gummer told The Crag & Canyon that removing the car will prove challenging, as they don’t want to disturb the settled substance and potentially aggravate aquatic populations, nor do they want the fly ash to move further downstream.

It is expected the car will remain in place until cleanup is complete.

Through its cleanup plan CP aims to restore the area to its original condition, stated Gummer’s email.

Canada’s mountain parks have seen a series of derailments in the past few months.

Last Wednesday, six empty CP Rail cars jackknifed near the Spiral Tunnels in Yoho National Park. There were no injuries, but the incident brings the tally up to four derailments for three months.